The map. Pink is what we did, Yellow was our intended route (a loop), orange are good campsites we saw or heard about from other trampers

Alas even sometimes the best laid tramping plans can go a bit sideways. We decided to leave our tent behind on this track, as Dylan recently weighed it at 4.5 kgs. We know that we enjoy ourselves much more if our packs are lighter, and that extra 4.5 kg really takes it out of us. We did bring our bedrolls, however, as we had most nights planned for 2 bunk bivvies.

The forecast was excellent, and we drove down to Lake Tennyson from Picton on the morning on Jan 4. It was very very hot, and after arriving at Lake Tennyson (a 2 hour drive along unsealed roads from Hamner Springs. Recommend a 4WD vehicle – mine definitely is not and we made it just fine, we just had to go very slowly as the roads hadn’t been graded in quite some time), we had a quick swim in Lake Tennyson before starting off on our walk. We got a lateish start, leaving about 3:30 pm. 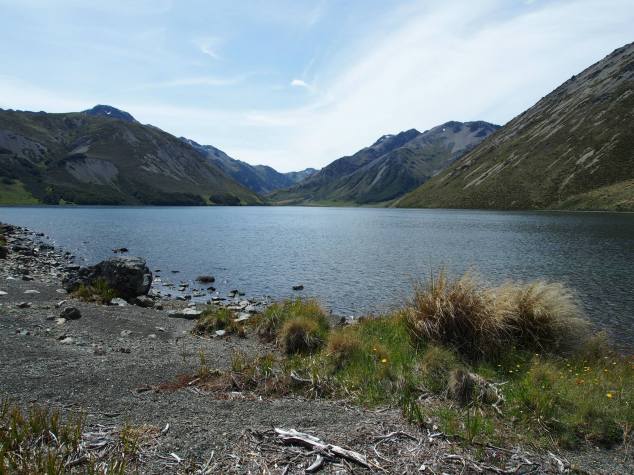 We made excellent time to Caroline Creek bivvy, smashing it out in about 5 hours or so (even with lots of fluffing around trying to get across the waiau river – it wasn’t very deep, but it was swift flowing. Crossing it where the fenceline intersects the track isn’t recommended. Instead, follow the river upstream where it widens out).

Following the fenceline from St. James Cycle track to the Waiau Pass track

Dylan relaxing in a lawn chair at Caroline Creek Bivvy

Jan 5 dawned another hot day, and we regretted not getting an earlier start (7:30). The track was very clearly marked the entire way (thanks to the Te Araroa trail), despite our topomap suggesting otherwise. The climb up went really well, a bit of scrambling near the top (I felt like I was having a rock climbing crash course at some points), and we kept remarking that we wouldn’t want to do Waiau pass in any kind of poor weather. There is a quite amazing lunch/rest stop with a small tarn and beautiful stream (which even results in a small swimming hole, large enough for 1 person to sit in if you’re keen) about halfway up. 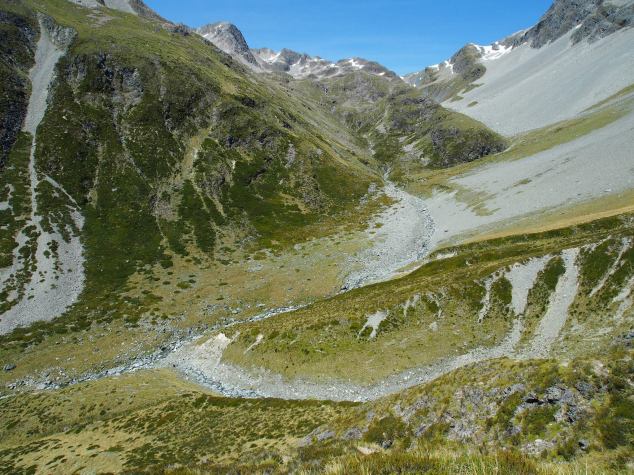 Looking across to the Thompson Pass route/Lake Thomspon (not visible)

We had lunch at the top of the pass at about 1, taking in the fabulous views. Then we had our descent into Lake Constance, which was hot hot hot. We met several Te Araroa trail walkers at this point, who must have been roasting during their climb. All up, it was probably roughly 400 m of scree to descend, and the only thing keeping us going were the views of Lake Constance and the promise of a swim!

We had another long rest for snacks and swims at beautiful Lake Constance. At this point, Dylan revealed his terrible (angry, red and starting to get weepy) pack rash which had been bothering him all day. I raided our first aid kit for some wound pads and athletic tape to make a very large bandage for his lower back.

Then it was the final homestretch into Blue Lake. Although we had done most of this track before, the long climb up along the bluffs along Lake Constance was a bit of a rude surprise after all the climbing we’d already done for the day. Combined with the heat and pack rash, it wasn’t a very fun last couple of hours – as it did take us a couple of hours to make it to our final destination.

It was well worth it though, as Blue Lake was as beautiful as we remembered. We spent the evening cooking by the side of the lake (why spend time in the hut when you’re at blue lake?!) and chatting with our fellow trampers. We decided to take the next day as a rest day, as Dylan’s back was in pretty bad shape and a day of rest would hopefully help heal it a bit. 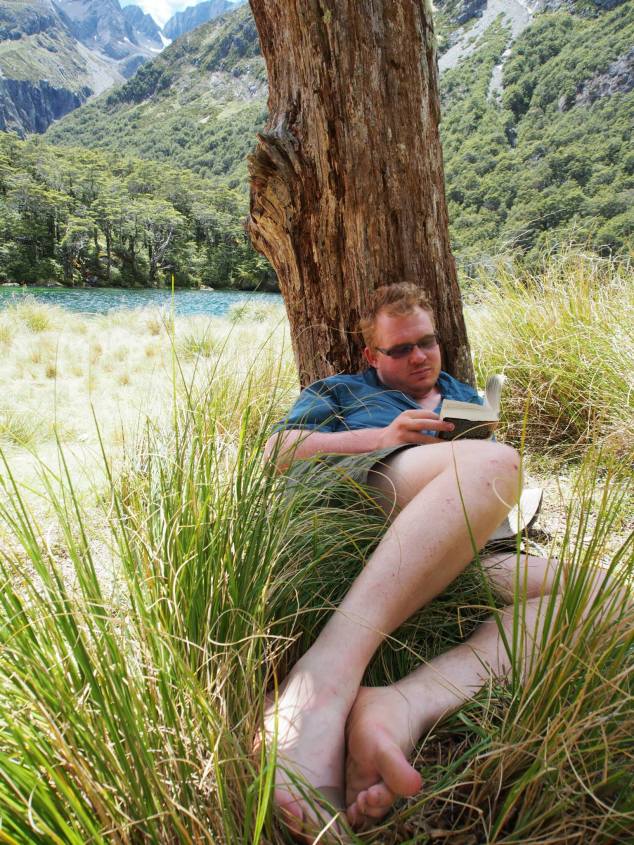 Dylan and I were still the most hardcore swimmers of the group, as most people only managed 1 jump into blue lake (it ranges 4-8°C), whereas I had 4 swims, and Dylan had about 5 or 6.

After our day of rest at Blue lake (honestly, if there is a place where you’re going to get “stranded” with an enforced day of rest, that is the spot you want to be!), we decided the most sensible thing due to health constraints would be to retrace our steps back over Waiau pass. This time, though, we got a really early start, and did the pass with 4 others, all of whom were doing the Te Araroa trail.

As we descended the pass, we met a couple who had been camped at Lake Thompson the night before and said it was a beautiful campsite. Dylan and I were most envious. We also heard that coming into Lake Thompson from the d’urville valley appeared to be quite steep and possibly a bit on the sketchy side (although there were descriptions on how to approach the Thompson pass in blue lake hut, and of course, at least one of the trampers at the hut had done that particular route).

My leg started to bother me more and more as the day went on as well, and although we made excellent time to Caroline Creek Bivvy (a mere 8 hours this time), my knee/ITB did not have anything left, so despite visions of us walking the rest of the way to the car that day and camping at Lake Tennyson that night,we spent the afternoon reading in the sun and getting eaten alive by sandflies at Caroline Creek Bivvy.

Another night at Caroline Creek Bivvy… so many sandflies!

Jan 8 dawned misty – our first cool day! At this point, we were looking forward to walking out. Which, had my knee/leg been in better shape, would have been a breeze as we now knew to cut across to the fenceline from the river along an old 4WD track (it intersects the fenceline at a gate). But as we climbed Mailing pass, my knee/leg became more and more sore, and I slowed down quite significantly. Luckily at the top of the pass, we came across a couple who Dylan convinced into driving me and my pack out to the end of the road where he would pick me up with the car.

We then had a 2 hour drive to Hamner Springs where we luxuriated in the hot springs for a solid couple of hours [I particularly made use of the jets on my knee/leg] before heading on our way to get some Indian takeaway in Ashburton.

We couldn’t believe the difference 2 years made at blue lake (largely due in part, I think, to the Te Araroa trail). When we were last there – exactly 2 years to the day, we were the only people there. This time, the hut was 80% full both nights, and there were campers next to the lake! I did feel a little sad as all of the Te Araroa trail walkers we met on the first day went past blue lake as quickly as possible – e.g. they went from West Sabine all the way over Waiau pass in a day (hence it was late afternoon when we met them going over). Looking at the Te Araroa trail map, the Nelson Lakes area is probably one of the highlights of the entire walk! Blue lake is one of the most beautiful spots in New Zealand (in my humble opinion), and worth spending an afternoon, if not an entire day. So admittedly, the Te Araroa trail is not something on my bucket list. I’d rather just tramp into places I want to see instead of walking the entire length of the country, mostly in valleys and often along roads.

Dylan and I learned a lot on this tramp. Pack rash! A new and exciting tramping ailment. Apparently nearly 10-12 days of tramping in heat and nearly in a row is too much. Also, 9 days of tramping with a 1000m descent is too much for my knee/leg/ITB. We also learned about tarptents – a 1.5 kg tent with double doors, etc. from our Te Araroa trail friends.

We spread the word about dehydrating your own meals, and what works well (and what doesn’t). We were also surprised at the number of people tramping in shoes or “not-boots”. Dylan and I clearly need to work on our ankle support.

We were also pleased to have swum in all 3 lakes we came across – Tennyson, Constance and Blue Lake. Take note, Lake Thompson, you’re next on the list!

And as usual, we realized that we still haven’t completed the Nelson Lakes area (Lake Thompson, Moss Pass, Cuopola hut, Hopeless hut, the Sunset Saddle and Mt. Angelus are still all on the list…) – which is still one of my favourite parts of the country.

From Waiau Pass, looking into the Waiau river valley