Another late post! Dylan and I wanted to get away on an “easy” trip the first weekend in June. We finally decided to tick off a trip that Dylan had wanted to do for 3 years now – the Livingstone range which is the ridgeline just above the Greenstone track.

We set off from work earlyish on a Friday, and made it to the Divide in good time – around 9:30 or so. We had a very crisp walk into the Lake Howden hut – took roughly an hour. I felt very guilty as we arrived into the hut around 11 pm and disturbed another pair who probably weren’t expecting other trampers to come clomping in so late at night.

The night was very cold and frosty. I slept about as poorly as I ever have in a hut as it was absolutely freezing. I’m not sure how it’s possible, but I’m certain Howden hut was colder inside than outside. Honestly, even Dylan was cold. It was like sleeping in a fridge.

But we had a decent start and headed back up to Key Summit and had easy travel along the tops – there is a route most of the way. We were rewarded with many spectacular views. 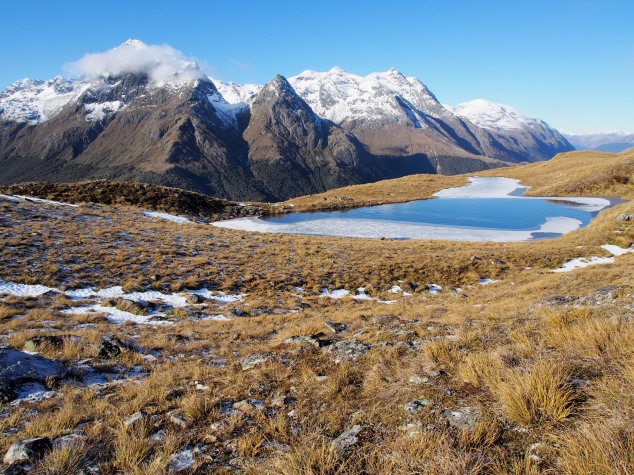 As the day progressed, the wind started to pick up and clouds started to come in – it was getting cold and I was getting tired. After some discussion, we decided to head down towards McKellar hut earlier than planned (our original plan was to hit 1543 then come down the ridge as we anticipated there might be a bit of a track there). Instead, we ended up going down a very steep face and then bush bashing for ages. I’m not sure when the last time you tried to bushbash your way through fiordland forest but I do not recommend it. I had no idea that ferns felt so much like razors on bare skin (sure it’s winter but this is NZ so who wears pants, am I right?)! 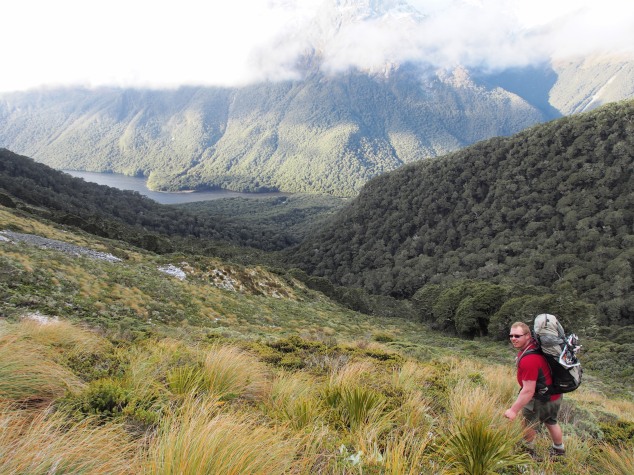 Descending back down towards McKellar Hut

After a couple of hours struggling to make our way down, we finally made it back to the Greenstone track. We were very glad to see signs of civilization again. So much for an “easy” day!

That night we had McKellar all to ourselves (some hunters were holed up in the warden’s quarters, however) and managed to get it nice and toasty. And being the good trampers we are, we left it stocked with more wood than was there when we arrived (as many previous trampers complained about the lack of dry wood upon arrival at the hut). I hope whoever arrived after us did the good thing and continued to replenish the hut wood supply.

Re-stocking the wood in the hut

Paying it forward… leaving heaps of wood for future trampers

Sunday was a super easy day after our wood making session. And as a bonus, we came across this little guy – a species of fungus I had never seen before – for which I was incredibly thrilled.

Have you been able to get out on many trips this winter? Happy Tramping!

Back in 2012, Dylan and I walked the Kepler in a day with our local tramping club. Dylan had to do a lot of convincing to get me to do it (I honestly thought it was a terrible idea the first time I heard it suggested), so we did quite a lot of training (long day walks) in preparation.

Well, we managed to do most of it. We bailed out at Rainbow Reach (50 km mark) as there is a carpark there, and the others knew to come pick us up. It took us 12 hours to get there (including side trip up to the top of Mt. Luxmore, and 30 min of lunch at Iris Burn), we were absolutely stuffed, our feet were completely hammered (blisters, bleeding, etc.) and at the time we both thought it was the worst day we’d ever had. But for some reason, I thought it would be easier if you ran part of it, as the day wouldn’t be quite so long.

There is no way I was going to walk 60 km and take more than 12 hours!

Unfortunately, when I began my training back in July after registration (yes, I was lucky enough to get registered on the day it opened up!), I was possibly a little too enthusiastic, was wearing the wrong shoes, and had bad running form, as I immediately had a pretty bad running injury – ITB problems. So followed a solid 6-8 weeks of almost no running and PT. Then another 6+ weeks of PT and very little running. By the time October rolled around, I was running 30-40 min (not the 5-6 hours I should have been doing). Of course, we did do a number of tramps. And I did manage to squeeze some longish runs in before the big day (the longest I did was 23km).

So the big day finally arrived and although I wasn’t as prepared as I would have liked, I was as prepared as I could have been. And all in all, I felt pretty good for most of it. I mean, lets be honest, after about 45 km, you don’t really feel all that great. And I did walk a lot of it (as I had expected – all of the climbing and the steepest of the descent. I really just ran as much as possible along the flat). 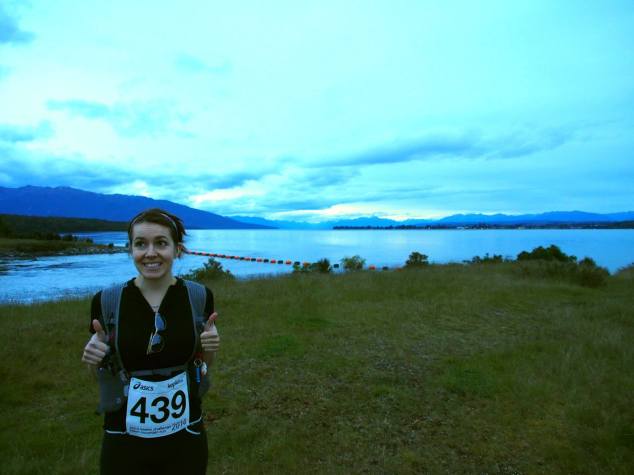 Start of the race. Nervous smile before the control gates.

I did make a couple of mistakes (queueing for 5-10 min at the very first toilet. After I came out I was officially the very last runner as I met the sweep at that point!). I also took my phone and took a few photos along the way. I stopped at all the water/snack stops for a few minutes. 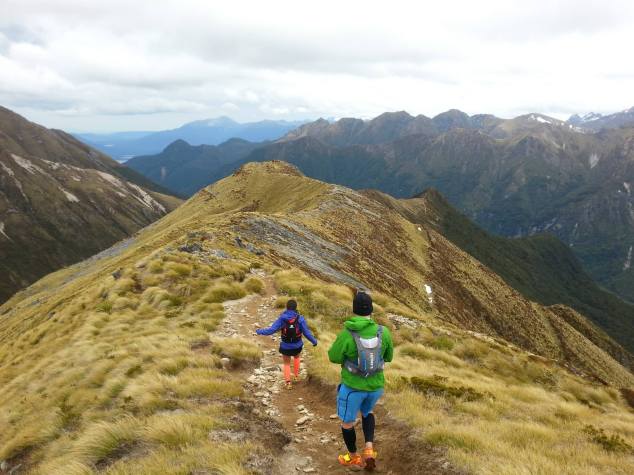 I followed this American couple most of the day. They were running the Kepler as part of their honeymoon.

One of the professional photos I purchased from the race. This was right before Moturau hut – so approximately 44 km in. Not too shabby!

And I was definitely better prepared this time around – it’s always good to know what to expect on a course. My feet have gotten tougher over the years too, and I pre-taped any trouble spots. Which meant I never had to attend to my feet at all throughout the day, and only had 1 blister at the very end.

All in all, I’d call that a success. And besides, next year I can focus on working to beat my time. Fingers crossed I’ll be able to enter again (only 450 competitors are allowed to enter, and the waiting list is always maxed out as well)! 😀

Meanwhile, while I was doing the Kepler, Dylan was climbing Mt. Eldridge. But I’ll let him tell you about that.